The ballistic pendulum was used to measure the speeds of bullets before electronic timing devices were developed. The version shown in Fig. 10-11 consists of a large block of wood of mass M = 5.4 kg, hanging from two long cords. A bullet of mass m = 9.5 g is fired into the block, coming quickly to rest. The block + bullet then swing upward, their center of mass rising a vertical distance” = 6.3 cm before the pendulum comes momentarily to rest at the end of its arc. What is the speed of the bullet just prior to the collision? 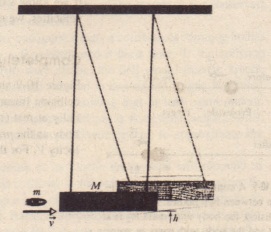