To throw an 80 kg opponent with a basic judo hip throw, you intend to pull his uniform with a force F and a moment arm d, = 0.30 m from a pivot point (rotation axis) on your right hip.

(a) What must·the magnitude of F be if, before you throw him, you bend your opponent forward to bring his center of mass to your hip.

SOLUTION: One Key Idea here is that we can relate your pull F on him to the given angular acceleration a via Newton’s second law.

(b) What must the magnitude of F be if your opponent remains upright before you throw him, so that FR has a moment arm d2 = O.12m from the pivot point.

SOLUTION: we know that the first term on the right is equal to 300 N. Substituting this and the given data, we have SOLUTION: The Key Ideas we need here are similar to those in (a) with one exception: Because the moment arm for Fx is no longer zero. the torque due to r,is now equal to d2mg, and is positive because the torque attempts counterclockwise rotation. 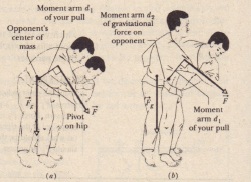