The Key Idea here is that. because the system is in static equilibrium. we can apply the balance of forces equations  and the balance’ of torques to it. The forces have nor components. so provides no information. For the y components.

Let us choose a rotation axis through the left end of the beam. We shall also use our general rule for assigning signs to torques: If a torque would cause an initially stationary body to rotate clockwise about the rotation axis. the torque is negative. If the rotation would be counterclockwise. the torque is positive. Finally, we shall write the torques in the form r.L F, where the moment. 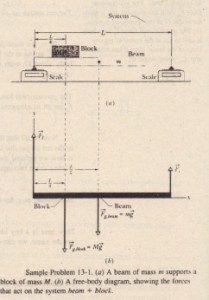