SOLUTION: One Key Idea here is that. because we have particles, the magnitude of the gravitational force on particle I due to either of the other particles. 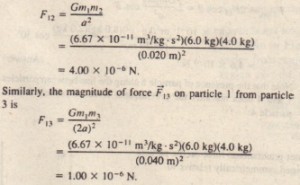 To determine the directions of we use this Key Idea: Each force on particle I is directed toward the particle responsible for that force. Thus is directed in the positive direction of and has only the)component  Similarly.