In the overhead view of  cookie tin is accelerated in the direction shown by a, over a friction less horizontal surface.

SOLUTION: One Key Idea here is that the pet force on the tin is the sum of the three forces and is related to the acceleration a of the tin via Newton’s  law Thus,

A second Key Idea is that this is a two-dimensional problem; so we cannot find merely by substituting the magnitudes for the vector quantities on the right side . We must vector the reverse the reverse as is shown.

Then, substituting known data, we find

Similarly, along the y axis we find 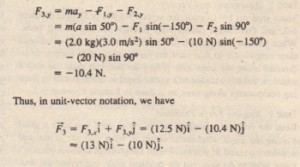