Shows constant forces acting on a box as the box slides rightward across a friction less floor. Force Fr is horizontal, with magnitude  is angled upward by,

SOLUTION: A Key Idea here is that we want an instantaneous power, not an average power over a time period. Also, we know the particle’s velocity (rather than the work done on it). 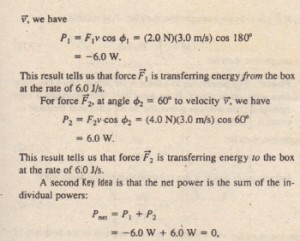 SOLUTION: The same Key Ideas as above give us, for the power.

Thus, the kinetic energy of the box is increasing, and so also is the speed of the box. With the speed increasing, we see from that the values , and thus also of will be changing. Hence, this net power of 3.0 W is the net only at the instant the speed is the given 3.0 m.