You’s probably experienced “sonic booms” caused by an airplane flying over faster of sound. Wecan see qualitatively why this happens from Fig. 21-15. Let speed of the airplane relative to the air, so that it is always positive. The lane through the air produces sound; if Vs is less than the speed of :Iv· •••,.,..,””in front of the airplane are crowded together with a wavelength given by equations.

When Vs is greater in magnitude than v, the source of sound is supersonic, and Eqs. (21-15) and (21-17) for the Doppler effect no longer describe the sound wave in front of the source. Figure 21-15b shows a cross section of what happens. As the airplane moves, it displaces the surrounding air and produces sound. A series of wave crests is emitted from the nose of the airplane; each spreads out in a circle centered at the position of the airplane when it emitted the crest. After a time t the crest emitted from point SI has spread to a circle with radius vt, and the airplane has moved a greater distance vst to position S2’You can see that the circular crests interfere constructively at points along the green line that makes an angle a with the direction of the airplane velocity.

In this relation, Vs is the speed of the source (the magnitude of its velocity) relative the air and is always positive. The ratio vJv is called the Mach number. It is than unity for all supersonic speeds, and sin a in Eq. (21-19) is the reciprocal of Mach number. The first person to break the sound barrier was Capt. Chuck Yeager of U. S. Air Force, flying the Bell X-I at Mach 1.06 on October 14, 1947.

The actual situation is three-dimensional; the shock wave forms a cone around direction of motion of the source. If the source (possibly a supersonic jet airplane rifle bullet) moves with constant velocity, the angle a is constant, and the shoe come moves along with the source. It’s the arrival of this shock wave that causes. 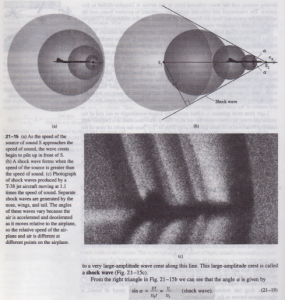