The optical system of a telescope is similar to that of a compound microscope. In both instruments the image formed by lII) objective is viewed through an eyepiece. The key difference is that the telescope is used to view large objects at large distances and the microscope is used to view small objects close at hand. Another difference is that many telescopes use a curved mirror, not a lens, as an objective. An astronomical telescope is shown in Fig. 36-15. Because this telescope uses a lens as an objective, it is called a refracting telescope or refractor. The objective lens forms a real, reduced image I of the object. This image is the object for the eyepiece lens, which forms an enlarged virtual image of I. Objects that are viewed with a telescope are usually so far away from the instrument that the first image I is formed very nearly at the second focal point of the objective lens. If the final image I’ formed by the eyepiece is at infinity (for most comfortable viewing by a normal eye), the first image must also be at the first focal point of the eyepiece. The distance between objective and eyepiece, which is the length of the telescope, is therefore the sum of the focal lengths of objective and eyepiece.j, +!2′

The angular magnification M of a telescope is defined as the ratio of the angle subtended at the eye by the final image I’ to the angle subtended at the (unaided) eye by the object. We can express this ratio in terms of the focal lengths of objective and eyepiece. In Fig. 36-15 the ray passing through FI’ the first focal point of the objective, and through F2′, the second focal point of the eyepiece, is shown as a darker color. The object (not shown) subtends an angle (J at the objective and would subtend essentially the same angle at the unaided eye. Also, since the observer’s eye is placed just to the right of the focal point Fz’, the angle subtended at the eye by the final image is very nearly equal to the angle (J’. Because bd is parallel to the optic axis, the distances ab and cd are equal to each other and also to the height y’ of the real image I. Because the angles (J and (J’ are small, they may be approximated by their tangents. From the right triangles Flab and Fz’cd, The angular magnification M of a telescope is equal to the ratio of the focal length of the objective to that of the eyepiece. The negative sign shows that the final image is inverted.

Equation (36-5) shows that to achieve good angular magnification, a telescope should have a long objective focal lengthj., By contrast, we found in Section 36-5 that a microscope should have a short objective focal length. However, a telescope objective with a long focal length should also have a large diameter D so that thef-numberf/D will not be too large; as described in Section 36-2, a large f-number means a dim, low-intensity image. Telescopes typically do not have interchangeable objectives; instead, the magnification is varied by using different eyepieces with different focal lengths J;. Just as for a microscope, smaller values off2 give larger angular magnifications. An inverted image is no particular disadvantage for astronomical observations.

When we use a telescope or binoculars to view objects on the earth, though, we want the image to be right-side up. Inversion of the image is accomplished in prism binoculars by a pair of 45°-45°_90° totally reflecting prisms called Porro prisms (introduced in Section 34-4; see Fig. 34-10). These are inserted between objective and eyepiece, as shown in Fig. 36-16. The image is inverted by the four internal reflections from the 45° faces of the prisms. The prisms also have the effect of folding the optical path and making the instrument shorter and more compact than it would otherwise be. Binoculars are usually described by two numbers separated by a multiplication sign, such as 7 x 50. The first number is the angular magnification M, and the second is the diameter of the objective lenses (in millimeters). The diameter helps to determine the light-gathering capacity of the objective lenses and thus the brightness of the image. In the reflecting telescope (Fig. 36-17) the objective lens is replaced by a concave mirror. In large telescopes this scheme has many advantages, both theoretical and practical. Mirrors are inherently free of chromatic aberrations (dependence of focal length on wavelength), and spherical aberrations (associated with the paraxial approximation)
are easier to correct than with a lens. The reflecting surface is sometimes parabolic rather than spherical. The material of the mirror need not be transparent, and it can be made more rigid than a lens, which has to be supported only at its edges.

The largest reflecting telescope in the world, the Keck telescope atop Mauna Kea in Hawaii, has a mirror of overall diameter 10 m; it is made up of 36 separate hexagonal reflecting elements. Lenses that are larger than 1m in diameter are usually not practical. Because the image is formed in a region traversed by incoming rays, this image can be observed directly with an eyepiece only by blocking off part of the incoming beam (Fig. 36-17a); this is practical only for the very iargest telescopes. Alternative schemes use a second mirror to reflect the image out the side or.through a hole in the primary mirror, as shown in Figs. 36-17b and 36-17c. When a telescope is used for photography, the eyepiece is removed, “andeither photographic film or an electronic detector is placed at the position of the real image formed by the objective. (Some long-focal-length “lenses” for photography are actually reflecting telescopes used in this way.) Most telescopes used for astronomical research are never used with an eyepiece. 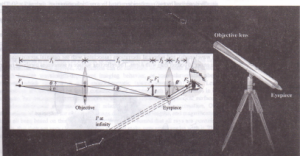