The Forces Of Rolling

If a wheel rolls at constant speed, as in Fig. 12-2, it has no tendency to slide at the point of contact P, and thus no frictional force acts there. However. if a net force acts on the  salling wheel to speed it up or to slow it, then that net force causes acceleration acorn of the center of mass along the direction of travel. It also causes the wheel to rotate faster or slower, which means it causes an angular acceleration a about the center of mass. These accelerations tend to make the wheel slide at P. Thus, a frictional force must act on the wheel at P to oppose that tendency.

Shows an example in which a wheel is being made to rotate faster.L while rolling along a flat surface, as Of] a bicycle wheel at the start of a race. The faster rotation tends to make the bottom of the wheel slide to the left at point P. A frictional force at P, directed to the right, opposes this tendency to slide. If the wheel does not slide, that frictional force is a static frictional force l; (as shown), the motion is smooth rolling, and  applies to the motion. (Without friction, bicycle races would be stationary and very boring. 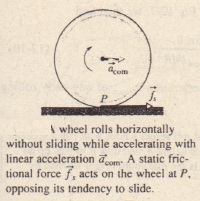