THE FUNDAMENTAL FORCES OF NATURE

Discussed several different kinds of forces-including weight, tension, friction, – resistance, and the normal force-and we will encounter others as we continue our • of physics. But just how many different kinds of forces are there? Our current is that all forces are expressions of just four distinct classes of fund forces, or interactions between particles (Fig. 5 -32). Two are familiar in y experience. The other two involve interactions between subatomic particles e cannot observe with the unaided senses. – the two familiar classes, gravitational interactions were the first to be studied. The weight of a body results from the earth’s gravitational attraction acting on sun’s gravitational attraction for the earth keeps the earth in its nearly circular ground the sun. Newton recognized that the motions of the planets around the sun free fall of objects on earth are both the result of gravitational forces. In Chapter will study gravitational interactions in greater detail, and we will analyze their in the motions of planets and satellites. Second familiar class of forces, electromagnetic interactions, includes electric forces. If you run a comb through your hair, you can then use the comb to bits of paper or fluff; this interaction is the result of electric charge on the comb. contain positive and negative electric charge, so atoms and molecules can forces on each other. Contact forces, including the normal force, friction, resistance, are the combination of all such forces exerted on the atoms of a atoms in its surroundings. Magnetic forces occur in interactions between between a magnet and a piece of iron. These may seem to form a different , but magnetic interactions are actually the result of electric charges in motion an electric current in a coil of wire causes magnetic interactions. We y electric and magnetic interactions in detail in the second half of this book.two interactions differ enormously in their strength. The electrical repulsion  two protons at a given distance is stronger than their gravitational attraction by of the order of 103s. Gravitational forces play no significant role in atomic or structure. But in bodies of astronomical size, positive charge and negative are usually present in nearly equal amounts, and the resulting electrical cancel each other out. Gravitational interactions are thus the dominant in the motion of planets and in the internal structure of stars. other two classes of interactions are less familiar. One, the strong interaction, for holding the nucleus of an atom together. Nuclei contain electrically. 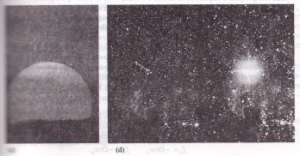 The subscript “rad” is a reminder that at each point the acceleration is radial toward the center of the circle. perpendicular to the instantaneous velocity. We . in Section 3-5 why this acceleration is sometimes called centripetal accelerate. . We can also express the centripetal acceleration rad in terms of the period T for one revolution: Uniform circular motion, like all other motion of a particle, is governed by  second law. The particle’s acceleration toward the center of the circle must be a force, or several forces. such that the vector sum is a vector directed the center (Fig. 5-24). The magnitude of the acceleration is constant, so the F net of the net inward radial force must also be constant. If an ice skater w . around in a circle on the ice, he must constantly pull on her inward toward of the circle. If he lets go, then the inward force no longer acts, and his partner in a straight line tangent to the circle (Fig. 5-25)

Uniform circular motion can result from any combination of forces, just so always directed toward the same point at the center of the circle and has magnitude. CAUTION ~ In doing problems involving uniform circular motion. tempted to include an extra outward force of magnitude m(u2/R) to “keep there” or to “keep it in equilibrium” this outward force is usually called force” (“centrifugal” means “fleeing from the center”) Resist this temp . this approach. is simply wrong First. the body does not “stay out there”; it is motion around its circular path. ·Its velocity is constantly changing in . accelerates and is not 41 equilibrium. Second. if there were an additional out fugal”) force to balance the inward force. there would then been  net in”, cause the circular motion. and the body would move in a straight i.e, (Fig. 5-25). Third. the quantity m(u2/R) is not a force; it corresponds to on; i-mil and does not appear in r1. It’s certainly true that a passenger’ going around a circular path on a level road tends to slide to the outside of though responding to a “centrifugal force.” But such a passenger is in and frame of reference in which Newton’s first and second laws don’t apply. As in Section 4-3, what really happens is that the passenger tends to keep straight line, and the outer side of the car “runs into” the passenger as the In an inertial frame of reference there is no such thing as We promise not to mention this term again, and we strongly advise you it as well. 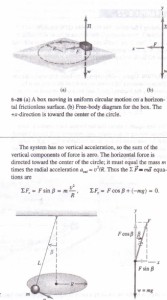 These are two simultaneous equations for the unknowns F and p. The equation for l F, gives F =mg/cos p; substituting this result into the equation for l we find tan We can rewrite this expression to relate p to the period T. The radius of the circle is R = L sin p, and the speed is the circumference 211″L sin P divided by the period T. v  211″Lsin P T . Substituting this into tan p= v2/gR, we obtain EXAMPLE 5-22  Once we know p, we can find the tension F from F =mg/cos p. For a given length as the period smaller, cos p decreases, the angle p increases, and the F =mg/cos p increases. The angle can never be 90°, this would require That T= 0, F = 00, and v = 00. This called a conical pendulum because the suspending out a cone. It would not make a very good clock period depends on p in such a direct way. The first equation shows That the friction force needed to keep the car moving in its circular path increases with the car’s speed. But the maximum friction force available is which is constant, and this determines the car’s maximum speed. Substituting” for fan v”, for v in the l F, equation, we find so the maximum speed is v_ = 1. =0.87 and R = 230 m, then v~ = .J(0.87)(9.8 mis’ )(230 m) = 44 or about 160 IcmIh (100 miIh). This is the maxim Ibis radius. Note that the maximum centripetal aced (called the “lateral acceleration” in Example 3-II Why do we use the coefficient of static fricative ing car? If we take the curve at a slower speed than force is less than the maximum possible value – we try to take the curve going faster than the maxi the car can still go in a circle with out skidding, but will be larger and the car will run off the road.

neutral neutrons and positively charged protons. The charged protons repel and a nucleus could not be stable if it were not for the presence of an attar . a different kind that counteracts the repulsive electrical interactions. In this strong interaction is also called the nuclear force. It has much shorter range trial interactions, but within its range it is much stronger. The strong responsible for the creation of unstable particles in high-energy particle co Finally, there is the weak interaction. It plays no direct role in the be nary matter, but it is of vital importance in interactions among fund amen The weak interaction is responsible for a common form of radioactivity decay, in which a neutron in a radioactive nucleus is transformed into a ejecting an electron and an essentially mass less particle called an anticline . interaction between the anti neutrino and ordinary matter is so feeble that an could easily penetrate a wall of lead a million kilometers thick! During the past several decades a unified theory of the electromagnet interactions has been developed. We now speak of the electroplate int sense this reduces the number of classes of interactions from four to attempts have been~o understand strong, electromagnetic, and weak on the basis of a single unify theory called a grand unified theory (GU’I).  tentative steps have been ~n toward a possible unification of all inter theory of everything (TOE). Such theories are still speculative, and there are Swede questions in this very active field of current research.