THE MOTION OF PLANETS

The name planet comes from a Greek word meaning “wand= ets continually change their positions in the sky relative to the  of the great intellectual accomplishments of the sixteenth and the threefold realization that the earth is also a planet, that all that the apparent motions of the planets as seen from the earth determine the orbits of the planets. The first and second of these ideas were published by in 1543. The determination of planetary orbits was carried by the German astronomer and mathematician Johannes Kep of precise data on apparent planetary motions compiled b astronomer Tycho Brahe. By trial and error, Kepler discovered accurately described the motions of the planets.

1. Each planet moves in an orbit, with the sun.

2. A line from the sun to a given planet sweeps.

3. The periods of the planets are proportional to the lengths of their orbits.

Described in Kepler’s first law. Figure 12-13 The longest dimension is the major axis, with major axis. The sum of the distances from all points on the curve. Sand S’ are the (plural et is at P; we think of them both as points because distance between them. There is not his P the center of the ellipse is ea, where e is a dime called the eccentricity. If e = 0, the ellipse is a circle. nearly circular; their eccentricities range from earth’s orbit has e = 0.017). The point in the planet’s and the point most distant from the sun is for a body acted on by an attractive force proportional orbits are a circle or an ellipse; he also showed that open Fig. 12-11) must be parabolas or hyperbolas. These forward application of Newton’s laws and the law of.) equations than we’re ready for in Fig. 12-14. In a small time interval dt, the line from an angle d8. The area swept out is the colored The rate at which area is that the sector velocity has the same value at all is close to the sun, r is small and d8/dt is large; when is large and d8/dt is small. ~~ri~ii law follows from Newton’s laws, we express dAldt in o of the planet P. The component of v perpendicular to the the displacement along the direction. Using this relation in Eq. (12-16), (sector velocity). (12-17) of the vector product; xv, which in turn is 11 minutes the of the planet with respect to the sun. So we have 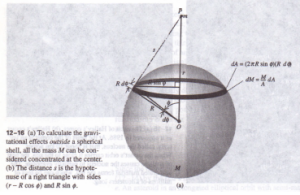 a proof for several years, and he delayed publication of the law found one. Here’s our program. Rather than starting with two  well tackle the simpler problem of a point mass m interacting with total mass M. We will show that when m is outside the sphere , associated with this gravitational interaction is the same as at the center of the sphere. According to Eq. (12-10), !be – derivative of the potential energy, so the force on m is also the Any spherically symmetric mass distribution can be thought -many concentric spherical shells, so our result will also hold for metric.
We start by considering a ring on the surface of the shell (Fi . the line from the center of the shell to m. The reason we do this is
that make up the ring are the same distance s from the point the potential energy of interaction between the earth by a distance r, is U = -GmEm/r. By changing notation in that in the situation shown in Fig. l2-16a, the potential energy the point mass m and a particle of mass m, To proceed, we need to know the mass dM of the ring. We can little geometry. The radius of the shell is R, so in terms of the , the radius of the ring is R sin 9, and its circumference is 211: ring is R d¢, and its area dA is approximately equal to its width. 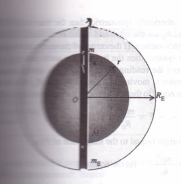 At points inside the earth, F. is directly proportional to the distance r from the center, rather than proportional to I/l as it is outside the sphere. Right at the surface, where r = RE’ the above expression gives F. = Gm.mJRE’, as we should expect. In the
next chapter we’ll learn how to compute the time it would take for the mail pouch to emerge on the other side of the earth Meanwhile, keep in mind that the assumption of uniform density of the earth is, like the hole, pure fantasy. We discussed the variation of density in the earth in Section 12-3. 12-18 A hole through the center of the earth (assumed to be uniform). When an object is at a distance 1’1’romthe center, only the mass inside a sphere of radius r exerts a net gravitational force on it.