A lens is a transparent object with two refracting surfaces whose central axes coincide. The common central axis is the central axis of the lens. When a lens is  surrounded by air, light refracts from the air into the lens, crosses through the lens, and then refracts back into the air. Each refraction can change the direction of trave lof the light.
A lens that causes light rays initially parallel to the central axis to converge is (reasonably) called a converging lens. If, instead, it causes such rays to diverge, the lens is a diverging lens. When an object is placed in front of a lens of either type, refraction by the lens’s surface of light rays from the object can produce an image of the object.
We shall consider only the special case of a thin lens-that is, a lens in which the thickest part is thin compared to the object distance p, the image distance i. and the radii of curvature r and “2 of the two surfaces of the lens. We shall also consider. 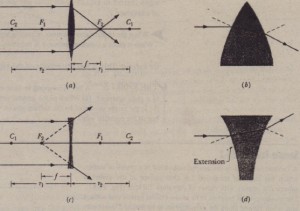 only light rays that make small angles with the central axis (they are exaggerated in the figures here). In Section 35-8 we shall prove that for such rays, a thin lens has a focal lengthf Moreover, i and p are related to each other by2