Before the magnetic effect of an electric current was discovered in the early nineteenth century magnets were made by stroking steel bars with a lodestone or with another magnet.

There are two ways in which this may be done, called the methods of single and divided touch respectively. In single touch a steel bar is stroked from end to end several times in the same direction with one pole of a magnet. Between successive strokes the pole is lifted high above the bar, otherwise the magnetism already induced in it will tend to be weakened (Fig. 30.6 (a).
The disadvantage of the above method is that it produces magnets in which one pole is nearer the end of the bar than the other. It is better to use the method of

divided touch, in which the steel bar is stroked from the centre outwards with unlike poles of two magnets simultaneously (Fig. 30.6 (b». In both of these methods it is to be noted that the polarity produced at that end of the bar where the stroking finishes is of opposite kind to that of the stroking pole. Steel knitting needles or pieces of clock spring may be magnetized by both methods and the polarity tested by obtaining repulsion with a magnetic needle. The magnets so made should also be dipped into iron filings, when the distribution of the filings will reveal the superiority of the
method of divided touch. 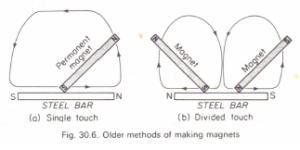 Another obsolete method of making magnets is described in a treatise on magnetism written by Dr. Gilbert in the reign of Elizabeth 1. In this method red-hot steel bars are hammered while allowing them to cool when lying in a N-S direction. More is said about this on page 357.