Torque on a Current Loop

Much of the world’s work is done by electric motors. The forces behind this work are the magnetic forces that we studied in the preceding section-that is, the forces  that a magnetic field exerts on a wire that carries a current.Figure 29-20 shows a simple motor, consisting of a single current-carrying loop immersed in a magnetic field B. The two magnetic forces 1and -1produce a torque on the loop, tending to rotate it about its central axis. Although many essential details have been omitted, the figure does suggest how the action of a magnetic field on a current loop produces rotary motion. Let us analyze that action. Figure 29-21a shows a rectangular loop of sides a and b, carrying current i  through uniform magnetic field B. We place it in the field so that its long sides,labeled 1 and 3, are perpendicular to the field direction (which is into the page), but its short sides, labeled 2 and 4, are not. Wires to lead the current into and out of the loop are needed but, for simplicity, they are not shown. To define the orientation of the loop in the magnetic field, we use a normal vector that is perpendicular to the plane of the loop. Figure 29-21b shows a right-hand rule for finding the direction of n. Point or curl the fingers of your right hand in the direction of the current at any point on the loop. Your extended thumb then points in the direction of the normal vector n. In Fig. 29-21c, the normal vector of the loop is shown at an arbitrary angle 8 to the din..ction of the magnetic field B. We wish to find the net force and net torque acting on the loop in this orientation. The net force on the loop is the vector sum of the forces acting on its four sides. For side 2 the vector L in Eq. 29-26 points in the direction of the current and has magnitude b. The angle between Land B for side 2 (see Fig. 29-21c) is 90° – 8. Thus, the magnitude of the force acting on this side is

You can show that the force 14 acting on side 4 has the same magnitude as 12 but the opposite direction. Thus, 12 and 14 cancel out exactly. Their net force is zero and, because their common line of action is through the center of the loop, their net torque is also zero. The situation is different for sides I and 3. For them, L is perpendicular to B,

so the forces 11 and 13 have the common magnitude iaB. Because these two forces. have opposite directions, they do not tend to move the loop up or down. However, as Fig. 29·21c shows, these two forces do not share the same line of action so they  do produce a net torque. The torque tends to rotate the loop so as to align its normal vector n with the direction of the magnetic field ii. That torque has moment and (b/2) sin 6 about the central axis of the loop. The magnitude T’ of the torque due to forces 11 and 13 is then .

Suppose we replace the single loop of current with a coil of N loops, or turns. Further, suppose that the turns are wound tightly enough that they can be approximated as all having the same dimensions and lying in a plane. Then the turns form a jet coil and a torque T’ with the magnitude given in Eq. 29-32 acts on each of them. The total torque on the coil then has magnitude.

in which A (= ab) is the area enclosed by the coil. The quantities in parentheses (NiA) are grouped together because they are all properties of the coil: its number of turns, its area, and the current it carries. Equation 29-33 holds for all flat coils, no matter what their shape, provided the magnetic field is uniform. Instead of focusing on the motion of the coil, it is simpler to keep track of the vector n, which is normal to the plane of the coil. Equation 29-33 tells us that a
current-carrying flat coil placed in a   magnetic field will tend to rotate so that haste same direction as the field. In a motor, the current in the coil is reversed as n begins to line up with the field direction, so that a torque continues to rotate the coil. This automatic reversal of the current is done via a commutator that electrically connects the  rotating coil with the stationary contacts on the wires that supply the current from some source

Analog voltmeters and ammeters work by measuring the torque exerted by a magnetic field on a current-carrying coil. The reading is displayed by means of the deflection of a pointer over a scale.   the essentials of a galvanometer, on which both analog ammeters and analog voltmeters are based. Assume the coil is 2.1 earn high and 1.2 cm wide, has 250 turns, and is mounted so that it can rotate about an axis (into the page) in a uniform radial magnetic field with B = 0.23 T. For any orientation   f the coil, then magnetic field through the coil is perpendicular to the normal vector of the coil (and thus parallel to the plane of the coil). A spring Sp provides a counter torque that balances the magnetic torque, so that a given steady current I in the coil rest ts in a steady angular deflection <p. The greater the current is, the greater the deflection is, and thus the greater the torque required of the spring is. If a current of 100 !JA produces an angular deflection of 28°, what must be the torsional constant K of the spring, as used in Eq. 16·22 (T = -K<p)?

SOLUTION: The Key Idea here is that, with a constant current through the device, the resulting magnetic torque (Eq. 29·33) is balanced by the spring torque. Thus, the magnitudes of those torques are 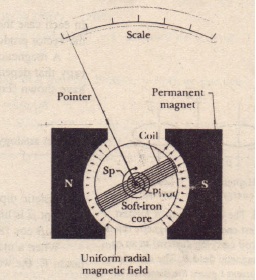