When the speed of a flowing fluid exceeds a certain critical value, the flow is no longer laminar. The flow pattern becomes extremely irregular and complex, and it changes continuously with time; there is no steady-state pattern. This irregular, chaotic flow is called turbulence. The contrast between laminar and turbulent flow is shown in Fig. 14-27 for two familiar systems: a stream of water and rising smoke in air. Bernoulli’s equation is
not applicable to regions where there is turbulence, because the flow is not steady.

The transition from laminar to turbulent flow is often very sudden. A flow pattern that is stable at low speeds suddenly becomes unstable when a critical speed is reached. Irregularities in the flow pattern can be caused by roughness in the pipe wall, variations in density of the fluid, and many other factors. At small flow speeds these disturbances damp out; the flow pattern is stable and tends to maintain its laminar nature. But when
the critical speed is reached, the flow pattern becomes unstable. The disturbances no longer damp out, but ‘grow until they destroy the entire laminar-flow pattern. Normal blood flow in the human aorta is laminar, but a small disturbance such as a heart pathology can cause the flow to become turbulent. Thrbulence makes noise, which is why listening to blood flow with a stethoscope is a useful diagnostic tool.

The balence poses some profound questions for theoretical physics. The motion of any particular particle in a fluid is presumably determined by Newton’s laws. If we know the motion of the fluid at some initial time, shouldn’t we be able to predict the motion at any later time? After all, when we launch a projectile, we can compute the entire trajectory if we know the initial position and velocity. How is it that a system that obeys well-defined physical laws can have unpredictable, chaotic behavior? There is as yet no
simple answer to these questions. Indeed, the study of chaos-seemingly unpredictable behavior in systems that should be entirely predictable-is a very active field of research. A particularly significant result of chaos research has been the discovery of similar behavior in a broad range of systems, including the evolution of biological populations, the growth of crystals, the shapes of coastlines, and many others. 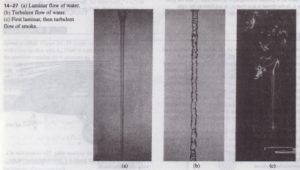