or substance called the medium for the wave. As the wave travels through the medium, the particles that make up the medium undergo displacements of various kinds, depending on the nature of the wave. Figure 19-1 shows three varieties of mechanical waves. In Fig. 19-1a the medium is a string or rope under tension. If we give the left end a small upward shake or wiggle, the wiggle travels along the length of the string. Successive sections of string go through the same motion that we gave to the end, but at successively later times. Because the displacements of the medium are perpendicular or transverse to the direction of travel of the wave along the medium, this is called a transverse wave. 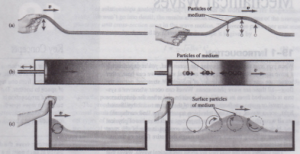 In Fig. 19-1 b the medium is a liquid or gas in.a tube with a rigid wall at the right end and a movable piston at the left end. If we give the piston.

In Fig. 19-1c the medium is water in a channel, such as an irrigation ditch or canal. When we move the flat board at the left end forward and back once, a wave disturbance travels down the length of the channel. In this case the displacements of the water have both longitudinal and transverse components.

Each of these systems has an equilibrium state. For the stretched string it is the state in which the system is at rest, stretched out along a straight line. For the fluid in a tube it is a state in which the fluid is at rest with uniform pressure, and for the water in a trough it is a smooth, level water surface. In each case the wave motion is a disturbance from the equilibrium state that travels from one region of the medium to another.

These examples have three things in common. First, in each case the disturbance
travels or propagates with a definite speed through the medium. This speed is called the speed of propagation, or simply the wave speed. It is determined in each case by the mechanical properties of the medium. We will use the symbol v for wave speed. (The wave speed is not the same as the speed with which particles move when they are disturbed by the wave. We’ll return to this point in Section 19-3.) Second, the medium itself does not travel through space; its individual particles undergo back-and-forth or up-and-down motions around their equilibrium positions. The overall pattern of the wave disturbance is what travels. Third, to set any of these y terns into motion, we have to put in energy by doing mechanical work on the stem. ‘The wave motion transports this energy from one region of the medium to another. IDes transport energy, but not matter; from one region to another.