With considered constant. the increment (small amount) of work done by the force in the  interval is now approximately given by

We can make the approximation better by reducing the strip width and using more strips. as in . In the limit, we let the strip width approach zero: the number of strips then becomes infinitely large and we have, as an exact result.

This limit is exactly what we mean by the integral of the function F(x) between the limits.

If we know the function F(x), we can substitute it into , introduce the proper limits of integration. carry out the integration. and thus find the work. (Appendix   contains a list of common integrals.) Geometrically.

The increment of work  done on the particle by F during the displacement d?

If F has only an x component, then the y and z terms in are zero and the equation reduces.

Equation 7-32 gives the work done by a variable force on a particle in a one dimensional
situation. Let us now make certain that the work calculated with  is indeed equal to the change in kinetic energy of the particle, as the work kinetic energy theorem states.

which we use Newton’s second law to replace F(x) with ma. We can write the quantity. 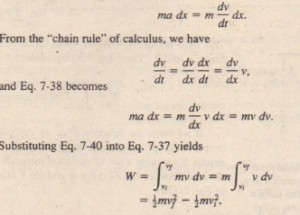 Note that when we change the variable from x to v we are required to express the limits on the integral in terms of the new variable. Note also that because the mass m is a constant, we are able to move it outside the integral.