Work Done by a Spring Force

We next want to examine the work done on a particle like object by a  articular  variable force-namely, a spring force, the force from a spring. Many forces in nature have the same mathematical form as the spring force. Thus, by examining this one force, you can gain an understanding of many others.

An x axis has been placed parallel to the length of a spring, with
the origin (x = 0) at the position of the free end when the spring is in its relaxed state. For this common arrangement.

Note that a spring force is a variable force because its magnitude and direction depend on the position x of the free end; F can be symbolized as F(x). Also note  that Hooke’s law is a linear relationship between F and x.

The Work Done by a Spring Force

To find an expression for the work done by the spring force as the block in  moves, let us make two simplifying assumptions about the spring. (I) It is mass less; that is, its mass is negligible compared to the block’s mass. (2) It is an ideal spring; that is, it obeys Hooke’s law exactly. Let us also assume that the contact between the block and the floor is friction less and that the block is particle like. 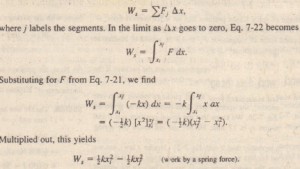 This work W. done by the spring force can have a positive or negative value, depending on whether the net transfer from the block as the block moves.

The Work Done by an Applied Force

Now. suppose that we displace the block along the X axis while continuing 10 apply a force Fa to it. During the displacement, our applied force does work  on the block while the spring force does work , the change in the kinetic energy of the block due to energy transfers.

Caution: If the block is not stationary before-and after the displacement. then this statement is not true.

CHECKPOINT 4: For three situations, the initial and final positions. respectively, along
the x axis for the block in each situation is the work done by the spring force on the block positive, negative.