shows an emf device (consider it to be a battery) that is part of a simple circuit containing a single resistance R (the symbol for resistance and a resistor is JoNor). The emf device keeps one of its terminals (called the positive terminal and  ften labeled +) at a higher electric potential than the other terminal (called the negative terminal and labeled . We can represent the emf of the device with an arrow that points from the negative  terminal toward the  positive terminal as in Fig.   8-). A small circle on the tail of the emf arrow distinguishes it from the arrows that indicate current direction. When an emf device is not connected to a circuit, its internal chemistry does not cause any net flow of charge carriers within it. However, when it is connected to a circuit as in Fig. 28-1, its internal chemistry causes a net flow of positive charge  arriers from the negative terminal to the positive terminal, in the direction of the emf arrow. This flow is  arr of the current that is set up around the circuit in that same direction . 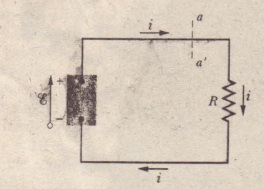 Within the emf device, positive charge carriers move from a region of low electric potential and thus low electric potential energy (at the negative terminal) to a region of higher electric potential and higher electric potential energy (at the positive terminal). This motion is just the opposite of what the electric field between the terminals (which is directed from the positive terminal toward the negative terminal) would cause the charge carriers to do. Thus, there must be some source of energy within the device, enabling it to do work on the charges by forcing them to move as they do. The energy source may be chemical, as in a battery or a fuel cell. It may involve mechanical forces, as in an electric generator. Temperature differences may supply the energy, as in a thermopile;or the Sun may supply it, as in a solar cell. Let us now analyze the circuit of Fig. 28- I from the point of view of work and energy transfers. In any time interval dt, a charge dq passes through any cross section  f this circuit, such as 00′. This same amount of charge must enter the emf device at its low-potential end and leave at its high-potential end. The device must do an amount of work dW on the charge  dq to force it to move in this way. We define them of the emf device in terms of this work

When an emf device is connected to a circuit, the device transfers energy to the charge carriers passing through it. This energy can then be transferred from the charge carriers to other devices in the circuit, for example, to light a bulb. Figure 28-2a shows a circuit containing two ideal reach rateable (storage) batteries A and B. a resistance R, and an electric motor M that can lift an object by using energy it obtains from charge carriers in the circuit. Note that the batteries are connected so  that they. tend to send charges around the circuit in opposite directions. The actual direction of the current in the circuit is determined by the battery with the larger emf, w ich happens to be battery B, so the chemical energy within battery B is decreasing as energy is transferred to the charge carriers passing through it. However,  the chemical energy within battery A is increasing because the current in it is directed from the positive terminal to the negative tanning!. Thus, battery B is charging battery  . Battery B is also providing energy to motor M and energy that is being dissipated by resistance R.  shows all three energy transfers from battery B; each decreases that battery’s chemical energy .