X rays are electromagnetic radiation whose wavelengths are of the order of  I A (= 10-10 m). Compare this with a wavelength of 550 nm (= 5.5 X 10-7 m) at the center of the visible spectrum.  shows that x rays are produced   hen electrons escaping from a heated filament Fare accelerated by a potential differenceV and strike a metal target T.  A standard optical diffraction grating cannot be used to discriminate between different wavelengths in the x-ray wavelength range. For A = I A (= 0.1 nm) and d = 3000 nm, for example,  shows that the first-order maximum

This is too close to the central maximum to be practical. A grating with d = A is desirable, but, since x-ray  avelengths are about equal to atomic diameters, such gratings cannot be constructed mechanically.In 1912, it occurred to German physicist Max von Laue that a crystalline solid,  which consists of a regular array of atoms, might form a natural three-dimensional “diffraction grating” for x-rays. The idea is that, in a crystal such as sodium chloride(NeCl), a basic unit of atoms (called the unit cell) repeats itself throughout the array. In NaCI four sodium ions and four chlorine ions are associated with each unit cell.  represents a section through a crystal of aCI and identifies this basic  unit. The unit cell is a cube measuring ao on each side.When an x-ray beam enters a crystal such as NaCl, x rays are scattered-that is, redirected-in all directions by the crystal structure. In some directions the scattered waves undergo destructive interference, resulting in intensity minima: in other directions the interference is constructive, resulting in intensity maxima. This process of scattering and interference is a form of diffraction, although it is unlike the diffraction  of light traveling through a slit or past an edge as we discussed earlier.Although the process of diffraction of x-rays by a crystal is complicated. the maxima turn out to be in .directions as if the x-rays were reflected by a family of parallel reflecting planes (or crystal planes) that extend through the alOI11Swithin the crystal and that contain regular arrays of the atoms. (The x-rays are not actually reflected; we use these fictional planes only to simplify the analysis of the actual  diffraction process.) shows three of the family of planes, with interplanar spacing d. from which the incident rays shown are said to reflect. Rays I. 2, and 3 reflect from  the first. second. and third planes. respectively. At each reflection the angle of incidence and the angle of reflection are represented with 8. Contrary to the custom 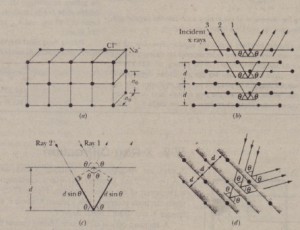 The cubic structure of NaCI. showing the sodium and chlorine ions and a unit cell (shaded). (h) Incident x-rays undergo diffraction by the structure of (0). The x rays are diffracted as if they were reflected by a family of parallel planes, with the angle of reflection equal to the angle of incidence. both angles measured relative to the planes (not relative  to a normal as in optics). (e) The path length difference between waves effectively reflected by two adjacent planes is 2d sin 8. (d) A different orientation of the incident x-rays relative to the structure. A different family of parallel planes now effectively reflects the x-rays.in optics, these angles are defined relative to the surface of the reflecting plane rather  Than a normal to that surface. For the situation of  the interplanar spacing happens to be equal to the unit cell dimension  Figure 37-26c shows an edge-on view of reflection from an adjacent pair of planes. The waves of rays I and 2 arrive at the crystal in phase. After they are reflected, they must again be in phase, because the reflections and the reflecting planes have been defined solely to explain the intensity maxima in the diffraction of
x-rays by a crystal. Unlike light rays, the x-rays do not refract upon entering the crystal; moreover, we do not define an index of refraction for this situation. Thus, the relative phase between the waves of rays I and 2 as they leave the crystal is set  solely by their path length difference. For these rays to be in phase, the path length difference must be equal to an integer multiple of the wavelength A of the x-rays. By drawing the dashed perpendiculars in , we find that the path length difference is 2d sin 8. In fact, this is true for any pair of adjacent planes in the family of planes represented in .Thus, we have, as the criterion for intensity maxima for x-ray diffraction,

where m is the order number of an intensity maximum. Equation 37-31 is called Bragg’s law after British physicist W. L. Bragg, who first derived it. (He and his father shared the 1915 Nobel prize for their use of x-rays to study the structures of crystals.) The angle of incidence and reflection in Eq. 37-31 is called a Bragg angle. Regardless of the angle at which x rays enter a crystal, there is always a family of planes from which they can be said to reflect so that we can apply Bragg’s law.  In Fig. , notice that the crystal structure has the same orientation as it does , but the angle at which the beam enters the structure differs from that shown in Fig. 37-26b. This new angle requires a new family of reflecting planes, with a different interplanar spacing d and different Bragg angle 8, in order to explain  the x-ray diffraction via Bragg’s law.Figure 37-27 shows how the interplanar spacing d can be related to the unit cell  dimension ao. For the particular family of planes shown there, the Pythagoreantheorem gives

Diffraction When waves encounter an edge or an obstacle or an aperture with a size comparable to the wavelength of the waves.  those waves spread out as they travel and. as a result, undergo interference, This is called diffraction.Single-Slit Diffraction Waves passing through a long narrow slit of width a produce. on a viewing screen. a single-slit diffraction  pattern that includes a central maximum and other maxima.separated by  located at angles 0 to the central axis that satisfy.

Circular-Aperture Diffiraction Diffraction by a circular aperture or a lens with diameter d produces a central maximum and  concentric maxima and minima, with the first minimum at an angle of given by

Rayleign’s Criterion Rayleigh’s criterion suggests that two objects are on the verge of resolvability if the central diffraction maximum of one is at the first minimum of the other. Their angular .eparation must then be at least

patterns whose intensity I at angle 0 is 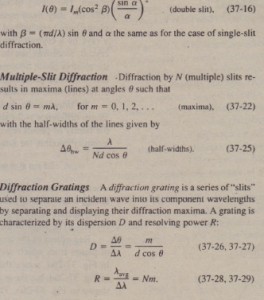