In a modem yo-yo, the string is not tied to the axle but is looped around it. When the yo-yo “hits” the bottom of its string, an upward force on the axle from the string stops the descent. The yo-yo then spins, axle inside loop, with only rotational kinetic energy. The yo-yo keeps spinning (sleeping) until you wake it by jerking on the string, causing the string to catch on the axle and the yo-yo to climb  back up.

To find an expression for the linear acceleration acorn of a yo-yo rolling down a string, we could use Newton’s second law just as we did for the body rolling down a ramp. The analysis is the same except for the following:

2. Instead of rolling on its outer surface at radius R, the yo-yo rolls on an axle of radius .

3. Instead of being slowed by frictional force I; the yo-yo is slowed by the force f on it from the string. 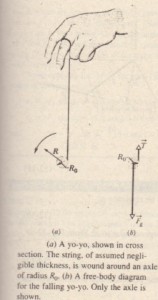